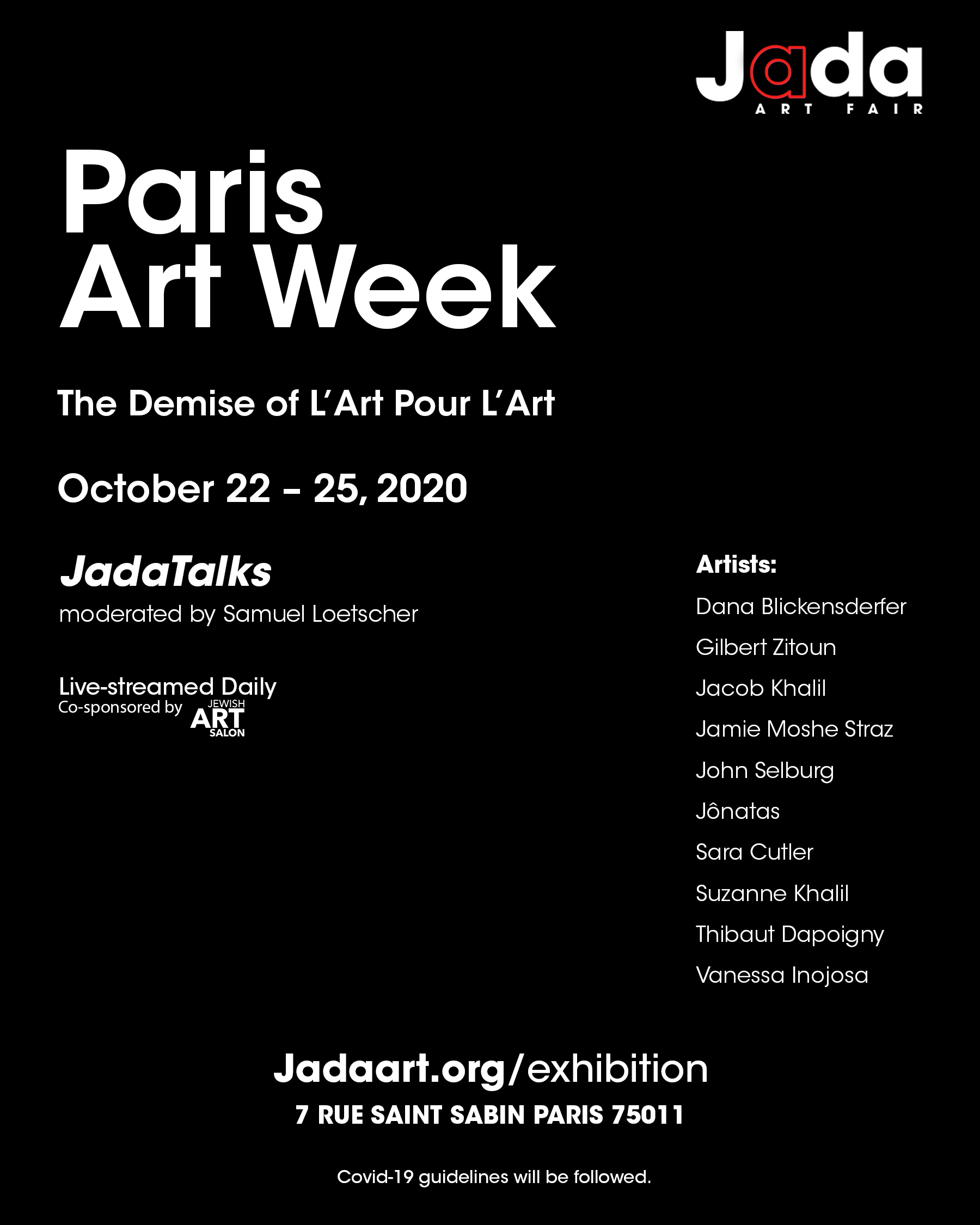 7
On behalf of Jada, we  would like to officially announce our next exhibition in Paris, France during Paris Art Week.

Paris Art Week
The Demise of Art For Art’s Sake

JadaTalks Topics:
The Death of Postmodernism and the Birth of Metamodernism

Postmodernism brought forth a wealth of new, exciting ideas that carried us through the latter half of the 20th century. Taking into account the irony, skepticism, and post-structural concepts of Postmodernism, Metamodernism brings the conversation between the old and the new forward by considering concepts such as the structure of feeling and the idea of a new sincerity that goes beyond irony.

Meme Warfare: The Aesthetics, Commodification, and Weaponization of Your Data

One of the most important topics of the last 5 years has been the commodification of online behavioral data by tech companies and the many ways that this data is sold, analyzed, and utilized. When this data is sold to advertisers or political campaigns it is then transformed into aesthetically targeted online content designed to elicit a certain kind of response from the viewer. This phenomenon brings forth many questions: Is this a new frontier in advertising or an invasion of privacy? Who owns the rights to my online behavioral data? What are we agreeing to when we accept the terms and conditions? What kind of imagery is going to provoke a response out of you?

Iran 2020: COVID, Protests, Assasination and the Art Created in Response

January of 2020 was a very tumultuous time for Iran. Mass protests throughout the country were taking place and tensions with the West were at an all time high following the assasination of Qasem Soleimani. As the year progressed, Iran became one of the first COVID hotspots outside of China and living conditions for the people of Iran further deteriorated. As protests and COVID continued to spread throughout the country, life went on for Iranians and as life went on, Iranians continued to tell their story through their art.

Global Quarantine and the Rise of Digi-Romantic Artists

Digi-Romanticism is defined by Jada as a term that depicts a social paradigm-shift among creatives, whose works contain an emotional appeal that clashes and contrasts with the fast-paced technological ethos in which they exist. Their production is often narrative-based, and aims to reclaim grand-narratives and utopian themes — as a reaction to the search for meaning and deeper content in daily life during confinement, which deprived all of the constant multi-sensorial stimulation of life pre-Covid19 Pandemic.

UFOs, 5G, and Epstein – Conspiracy, Truth, Lies, and Everything In-Between

Many believe that we currently live in a post-truth era. Conspiracies abound like never before due to the advent of the internet. Ideas that at one time were confined to dusty corners of book stores have now clawed their way into our collective consciousness. Even with the internet, these ideas can not spread without a visual language of their own.

Protests and The Art of Outrage

Prior to the pandemic, protests were in full swing for a myriad of different reasons throughout the world. This all came to a screeching halt when the world retreated into quarantine. Although health officials still urge us to wear masks and social distance from one another, hordes of people began pouring into the streets of cities around the world following the murder of George Floyd in Minnesota. As of September, 2020 protest movements are back in full effect around the world and they are being fueled by passionate activists and artists.

The Age of Internet Art

The internet is the only platform an enterprising artist needs to sell their works in the 21st century. Beyond graphic design, many artists now create both digital art pieces and artwork that references internet culture. Furthermore, many young artists today are digital natives that have always lived in a hybrid socialization structure that incorporates both online and in person interaction- making internet culture a universal reference point for this new generation of artists.

The End of Irony and the Birth of New Sincerity

New Sincerity repudiates the idea of irony and any other concept that purposely distorts meaning. The new sincerity movement strives to communicate an earnest meaning clearly and concisely. For too long we have relied on irony to express our ideas and our relationships with one another. The future today calls for naivete and sincerity in the way we approach one another to ensure that nothing gets lost in translation across the hybrid digital / physical landscape that we currently operate out of.

Future Imaginaries: A Deeply Human Approach to the Age of Singularity

Some of the biggest technological innovations of the 21st century are set to make their debut in the 2020s, namely brain-machine interfaces that will augment human intelligence with artificial intelligence. Many fear that these innovations will come at the cost of our humanity and usher us into an age of technological singularity. The big question is, how do we maintain our humanity while incorporating cybernetic augmentations and what role does art play in this?

Livestreaming and virtual exhibition available.
Covid-19 guidelines will be followed.