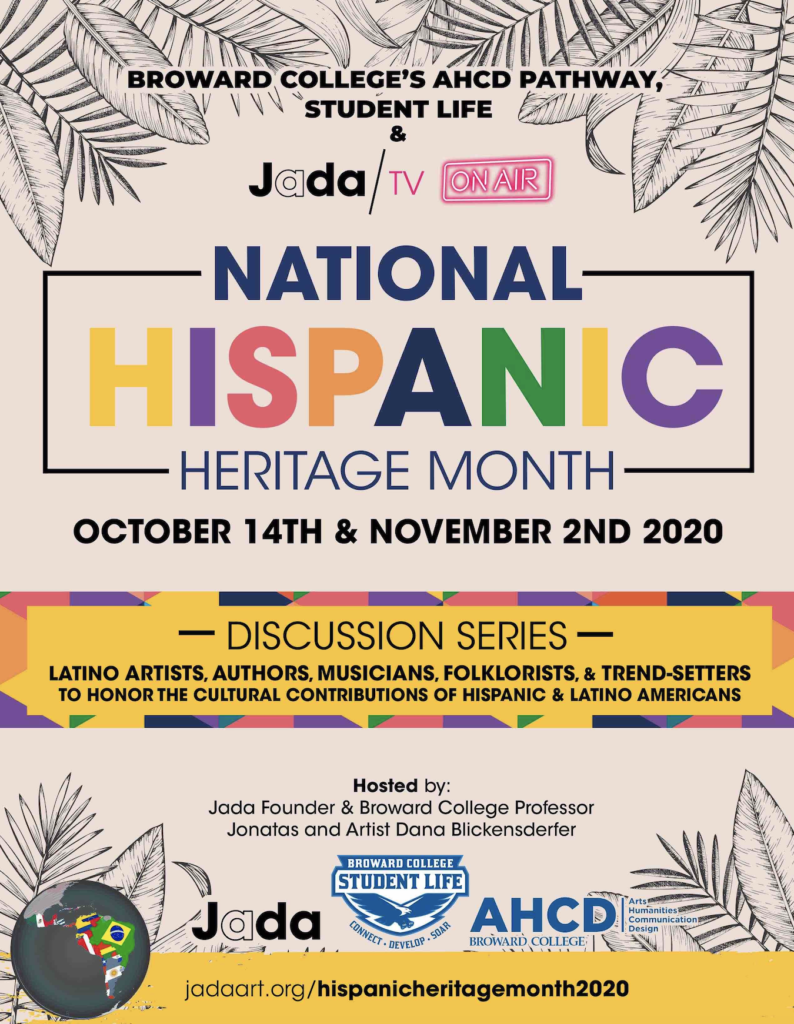 Join us for a Discussion Series featuring

to honor the  cultural contributions of Hispanic & Latino Americans

Areas of Expertise and Biographies of Participants for

An Associate Dean with Broward College’s Department of Arts, Communication, Humanities & Design – has over 30 years of educational experience and possesses degrees in Psychology, Counseling, and History.  His area of expertise lies in the History of Latin America and in the Social History of Medicine with special emphasis on the 20th century plague pandemic and, most recently, medical mistrust among immigrant and African American communities. He has been honored by the President of the Brough of Queens (New York), granted several Travel Awards, and – through the SunTrust Foundation – been the recipient of an Endowed Teaching Award.

Poet, performer, and medical doctor. Born in Miami from Caribbean heritage which has provided fertile ground for the rhythmic Afro-Caribbean style in which he writes and performs. He is the author of Cantos to Blood & Honey, Wise Fish, Handling Destiny, and has been published in several literary anthologies including Conjunctions, Paper Dance: 55 Latino Poets, Little Havana Blues, A Century of Cuban Writers in Florida, Step Into A World: A Global Anthology of New Black Literature, Renaming Ecstasy: Latino Writings on the Sacred. He is the recipient of a USA Knight Foundation Fellowship, a Cintas Fellowship, State of Florida Individual Artist Fellowship, the NALAC Fund for the Arts Individual Fellowship, the Eric Mathieu King award from the Academy of American Poets. Adrian Castro is also a board-certified Doctor of Acupuncture & Oriental Medicine, and herbalist.

Born in Havana to a Cuban Jewish family, Susana Behar grew up listening to not only Cuban music but also the traditional Sephardic songs of her Turkish Sephardic grandparents. While living in Venezuela, she began to pursue her passion for Jewish music while also exploring her love of Latin American folk songs. In 2007, Susana founded The Sephardic Music Ensemble and developed an extensive repertoire, helping to preserve this integral part of Jewish culture. A recipient of the 2015 Individual Artist Fellowship Award from the Florida Department of State, Division of Cultural Affairs, she has performed at festivals and concerts in the United States, South America, Mexico, Canada, Japan and Israel. Susana has released two albums, La Galana y El Mar (2010) and TAPIZ (2018) and is currently the Artist-in-Residence at the History Miami Museum. She volunteers her time, with Musicians On Call, among others. She lives in Miami and performs regularly throughout South Florida.

Brazilian-American multimedia artist, author, public speaker, adjunct professor at Broward College, and host of JadaTV. Jônatas’ work explores personal and collective identity amidst an ever-changing cultural landscape, often making use of pastiches of immigration documents, DNA exams, Inquisitional archives, and personal diaries. Jônatas was nominated Artist of the Year by the Anti-Defamation League in 2015, has being the recipient multiple artist and scholar-in-residence programs, and exhibited in museums, galleries, and university throughout the world. Jônatas holds a Bachelor of Arts Degree in Latin American, Caribbean, and Iberian Studies from The University of Madison-Wisconsin, and a Master of Fine Arts Degree from Florida International University. Jônatas is the co-founder of the Jada Art Movement.

Visual artist, founder of Provoke Art, co-founder of iBoss Advertising, and host of JadaTV. Dana combines drawing, painting, collage and printmaking into her practice. Her large-scale canvases demonstrate a personal lexicon with a wide range of references, including Egyptian art, Arabic symbolism and European modernist painting. Blickensderfer’s art bridges the past and the present, the private and the public, and the personal and the universal. In April 2016, her solo exhibition ‘Untitled’ held at the New York Art Expo, presented a distinctive series of 100 drawings questioning notions of identity and representation. Dana studied at the New York Studio School [NYSS], and was the recipient of the Milton and Sally Avery Scholarship Award.  Dana is the co-founder of the Jada Art Movement.